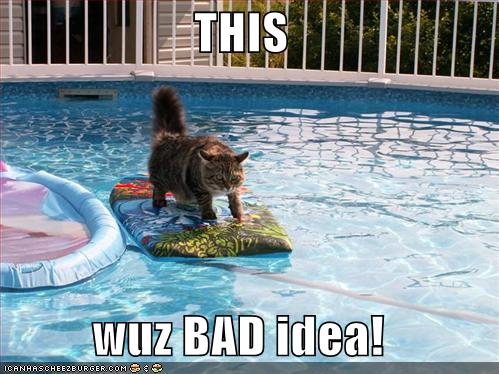 Failure happens. On the Internet when we talk about failure, we generally mean pictures of vehicles in strange places, large scale (and confusing) accidents and animated gifs of cats being cats. However, in Agile Business Management (and Agile in general) failure means something different.

Successful Agile is driven by continuous improvement which, in turn, is driven by experimentation; creating and exploring new ideas. However, because of the very nature of experimentation, any experiment can fail. Thus it is important to recognise failure early, identify the root causes and resolve (or avoid) the failure in the future. If failure is not recognised (or worse, recognised but not addressed), organisations will continue to invest in people, projects or processes that are flawed, which leads to a much greater impact over a longer period of time.

In a corporate environment, the fear of acknowledging failure has led to the worst kind of excesses and fraud. How many times have we seen fines and jail time levied upon traders for attempting to cover up earlier losses? It should go without saying, however, that failure is not the same as willful fraud and criminal activity.

Failure is difficult to acknowledge, and if personalised, can impact on feelings of self worth and capability. I will be honest and say that, even though I understand all the research and theory behind it, this is still something that even I still struggle with.

Remember: Just because something you have done failed, does not mean that you are a failure.

Many, otherwise Agile, organisations still do not have processes in place to identify, acknowledge and even reward failure. Therefore, I would like everyone to consider (and join) http://dayforfailure.com and celebrate October 13th as the International Day for Failure, a day where it is safe to talk about past failures without fear of reprisal or punishment. Ideally, everyday should be like this.